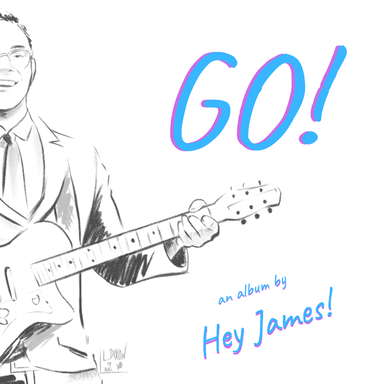 GO! is my second studio album.  I started this album very shortly after I released my first one in 2015, but had to put it on hold while I went to back to school.  I wrote bits and pieces over the next three and a half years, but was really motivated and inspired to finish it while I was in the final internship of my Early Childhood Education degree.  I was blessed enough to get to work in a Christian school for sixteen weeks.  During that time, I got my first full glimpses of the challenges Christian parents and teachers face in preparing their kids to face the world.   Those kids had (and still have!) my heart, and though I pulled out as many stops as I could and tried my hardest to leave everything on the table for them, sixteen weeks went by far too quickly.  I still had things that I wanted to share with them.  That's when it was time to get back to work on this record.

Furthermore - if there's one thing I really learned from sixteen weeks at a Christian elementary school, it's this:  there are a lot of adults, myself included, who at times GROSSLY underestimate the spiritual capacity of a child!  One of the things I really wanted to NOT do with this album was make it too silly or too corny.  I wanted to still make a fun and lighthearted, kid-appropriate album that gives kids credit for what they are able to understand and connect with.

The name of the album comes from the Great Commission, where Jesus told his followers to "GO" and make disciples.  These are songs about being more influential than influenced.

Finally, with GO!, I wanted to expand the target age range to include kids who are a little older.  Even more so than the first album, these songs are meant to be jumping off points for parents to teach crucial concepts about the Cause.   Please click the song title below to read the lyrics and the stories behind the songs!

Jesus Will Overcome
Stand Strong
God Will Keep Me Safe
Be A Blessing
GO!
Gentleness
Guard My Heart
This Good Work
​